July 29, 2011
Some general notes for those interested on converting stock Nsr250 carbs to PJ38mm or other carbs of the same venturi diameter.

A popular conversion is using the NF5G (1991) manifolds and carbs but they are getting rarer every day, so here are a few tips that may help. 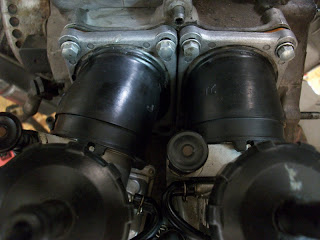 The CR125R manifolds should be a straight fit though I'm not sure about the clearance between the Pj38mm carbs but the manifolds are a little bit offset anyway, so there should be no problems at all. The models you are looking for are Cr125 1987-2000 plus the 2002 model.

By the way, the reed blocks are the same, so they are a straight swap, as is the V-Force equivalent (V301A). Thanks to edetuckracing blog for the exact model of the V-Force reed block.

If you are lucky enough to find the nf5 carb manifolds, the mounting holes should be elongated about 2mm, so they can fit the nsr250 crankcases. Also, there may be a clearance issue while using a ram air (Harc-Pro, JHA or I-Factory) or HRC airbox with the RH carb. This can be solved by using a Rs125 NF4 manifold.

The PJ carbs have a code on the body, I've seen lots of them, from PJ25 up to PJ32+ and this is not the size of the diameter but a production code depending on the bike & year it's been used. Minor differences here and there, mainly on air jets and some design features.

All the above comes to the conclusion that many Cr125-250 & Rs125 carbs and manifolds and Rs250 carbs can be used and this counts for PWK 38mm carbs as well. So there are plenty of options out there in a fraction of the cost of NF5 parts. Keep in mind that nf5 carbs have no provision for an idle circuit, solenoids, oil injection, air filter etc. and you will also have to find a way to set the TPS so the PGM unit can fully open the Rc Valves.

Also, I believe that the PJ38 will be inferior to stock nsr250 carbs, if they are going to be used on dead stock cylinders-crankcases. Don't expect that an alteration on base ignition advance and a set of expansion chambers will take real advantage of them while still keeping the stock primary CR and port timings...

All in all, don't take the hassle if you are not a hardcore two stroker...