July 24, 2011
A nice looking Tz250U 3AK '88 model.
Thinking of buying it though the asking price is a little bit on the high side but still is a nice and rare find.
Sounds ready for a race as well... 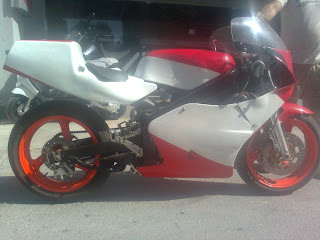 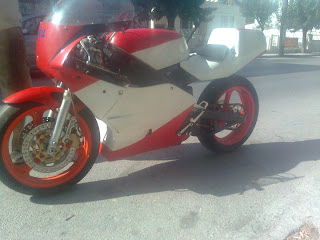 The reverse TZ250 models are the ones that really attracted some attention on Yamaha racing bikes.
The engine is similar to previous TZ models but with the cylinders now reversed 180 degrees with the carbs in front and the exhausts exiting straight to the rear.

Three models were released prior Yamaha started developing V2 engines.
The '88 model is the first reverse TZ250U (3AK) '88.
Then came the '89 Tz250W (3LC) '89, quite similar but with a few differences, like a newer design on the bodywork, more strengthened engine components, better brakes and powerjets on the carbs.
Last reverse is the TZ250A (3TC) '90, with the major differences from the previous model being a smaller crankcase and 5'' rear wheel. This model win the Isle of Mann at an average of 185 Km/H.