Some progress on the NF4

October 05, 2011
Spent a few hours assembling all the available parts on the nf4 and it now looks more like a proper racer rather than a messy rolling chassis. 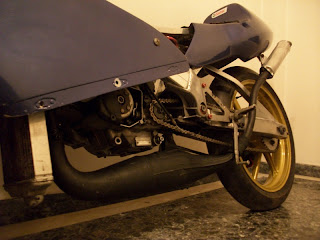 Temporarily fitted the engine as the axles and collars behind the silent blocks are missing.
Also some major missing parts :
RH rearset & brake lever
shift fork along with the shift rod, both ends and gear arm
clutch rod
water pump axle, impeller, gear, housing and corresponding bearing and seals

Tacho is missing, temp sensor does not work, CDI looks to be in good working order.

I intentionally oriented the throttle cable wrong as it seems like the stock carb manifold was junked and half of a MC18 manifold took it's place... never really understood why most people think inside the box. If it fits it doesn't mean it will work... obviously carb does not fit as well as there is not enough clearance with the swing arm. Clutch cable is wrong, most probably from a Cr125 bike as it's half meter longer than it should... 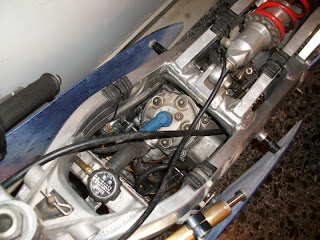 This little bad boy will rock... 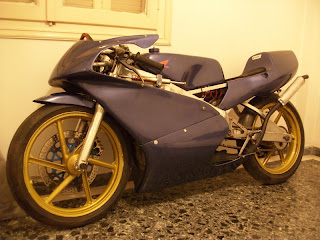